Ketone Levels: How Often Should I Check Them? 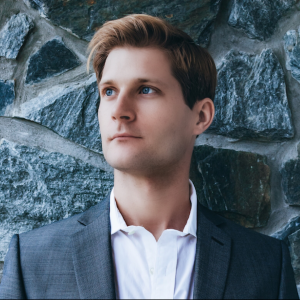 The keto diet has gone from relative obscurity, to complete domination. In just a few short years, keto has gone from the fringe to nearly 2 million Google searches per month. Along with intermittent fasting, the keto approach has taken the world by storm. And they are related. The keto diet aids in better cognitive functioning, as well as accelerated weight loss. Part of the ketogenic approach involves the production of an alternative fuel source called ketone bodies. These ketone bodies help fuel your brain and body since you will no longer be taking in large amounts of carbohydrates. Checking your ketone levels then becomes critical to ascertain your progress with the ketogenic diet.

What Is The Keto Diet?

The keto diet is the exact opposite of the standard American diet, which is heavily reliant on processed carbohydrates. In fact, a keto approach significantly restricts carbohydrates, instead using fat as the body’s fuel source. These fats are often medium chain triglycerides, which are unique in structure and provide quick energy for your brain. But why switch from a standard American diet? There are actually a myriad of reasons.

With medical experts estimating that 50% of the US population will be obese by 2030, it’s clear that the standard western diet isn’t working. High in sugar, low in nutrients, and sparse in protein – the average American overeats, but simultaneously also lacks vital nutrients. While there has been progress (such as attempts to tax soda consumption), there is still a huge lack of proper eating among 327 million Americans.. The keto diet brings the exact opposite – it’s low in sugar, lacking almost entirely in carbohydrates, and is filled with healthy fats. But perhaps most importantly, the keto diet eliminates processed and junk foods. These foods are notoriously popular in the American diet, even though they are very high in calories and completely devoid of nutrients.

Accompanying this shift, is a complete change in your body’s metabolism. Rather than relying on glucose, your body starts to run on ketones. Glucose becomes scarce, when you drop carbohydrate intake, therefore, your body must begin manufacturing another kind of fuel. At this point, your body begins to shift to an advanced state of fat burning, called ketosis.

Ketosis is a somewhat complex process, involving a shift in a wide variety of metabolic processes. Normally, your body relies on glucose and stored glycogen, for nearly all of its internal processes. This glucose and glycogen comes from the carbohydrates in the diet, which is why endurance athletes typically “carbo-load”. But when you remove all carbohydrates, your body must find another way to survive. This is where ketone bodies come in.

Your body responds to a depletion of carbohydrates by quite literally making a new form of fuel called ketones. These are produced by your liver, composed of fat (hence why the keto diet is referred to as a ‘fat burning’ approach). While ketone production is greatly increased during a ketogenic diet, the truth is that ketones are nearly always floating around your system.

The process of stored fat turning into energy is known as beta-oxidation. While there used to be confusion around ketosis and a much different (and highly dangerous) process called ‘metabolic ketoacidosis’ that typically involves Type I diabetics the truth is they have very little in common. During the process of ketosis, which is very safe, any excess ketones will be eliminated via breath or urine.

Interestingly, there is not just one type of ketone body, but rather, three. There’s acetone, BHB (beta-hydroxybutyric acid), and AcAc (acetoacetate). Of these, BHB is not technically a ketone, due to its structure. However, for our intents and purposes, BHB is included in nearly every discussion of ketogenic diets.

Both AcAc and BHB help to transport energy from your liver, to the other tissues inside your body. AcAc is the first ketone created, and from there, BHB is formed. Acetone is made as a byproduct of AcAc.

Scientists are not entirely sure, but surmise that we have the metabolic machinery necessary for ketosis since our ancestors needed an alternative fuel when food was scarce for long periods of time. This actually makes perfect sense, as otherwise we would have starved fairly quickly, and possess no other way to maintain our energy. In fact, before agriculture, it’s estimated that most of the human diet was very low carb, as higher carbohydrate foods were largely unavailable.

How Can You Check Your Ketone Levels?

There are a wide variety of ways to check your ketone levels, and they each have some unfortunate drawbacks. But for years, these were the best methods we had. Recent advances in technology have led to some amazing breakthrough techniques, like tracking your own sleep through the Apple Watch. Merely a few years ago, this was deemed impossible, and then with some small advances in technology – it becomes commonplace.

But before we get to the new advancements in ketone monitoring technology, we need to review the traditional methods. Just like a diabetic wants to track their blood sugar and insulin levels, keto dieters have an inherent need to know how deep into ketosis they actually are. Serious keto athletes have an even greater need to validate their ketosis level, especially if they are partaking in an athletic competition, or endurance event.

Another popular method for measuring ketones, blood testing is more accurate, but is also far more inconvenient. It’s simply not reasonable to expect a large percentage of the population to give themselves a blood test, multiple times each day which are required to track ketone variability all day. While blood ketones are generally considered the gold standard representation of your ketogenic state at any given point, the daily requirements of blood testing make this method unreasonable for the vast majority of the population.

Unlike a urine test, or a blood test, a ketone breath test is very convenient. However, the solutions on the market have been cheap and inaccurate. This is why we developed the first clinically-backed ketone breath monitor. Using patented deep-lung sampling technology, our device is both highly convenient, and accurate. You can get accurate readings at your desk at work, on the subway, or on a run.. All you need to do is breathe into the device, and you’ll have an accurate reading within moments.. Our clinical trial also showed interesting data points. For example, multiple (either breath or blood) ketone measurements per day are likely necessary to capture the full picture of daily ketone exposure.

In addition, breath and blood ketones can align or to be offset in time, with blood ketones usually changing first, followed by breath ketones. The daily area under the curve (AUC), or Ketone Score, provides a more comprehensive method for assessing daily ketone production. Interestingly, the AUCs from breath or blood measurements are highly correlated. Stated another way, if you check your breath multiple times per day using our device, your data will line up with a strong correlation with multiple blood measurements. Our data also showed that it’s necessary to take multiple measurements per day to capture the high variability of daily ketone levels. With these multiple measurements, our deep lung sampling technique and blood tests, provide very similar indications of overall ketone activity.

How Often Should You Check Your Ketone Levels

Further, many get obsessed with their ketone levels early on and feel that their ketone levels should be greater than they are observing. However, there is usually a good reason for early ketone readings so it’s important to have patience and continue to stay the course. Experts like Jeff Volek, PhD, agree that ketosis begins at concentrations of 0.5 mmol/L or 5 ACES in breath ketones.. Once you get into ‘deeper’ ketosis (1.0 to 3.0 mmol/L or 10-30 ACES in breath ketones), you should be more comfortable with the process, and should arguably be burning more fat.

The keto diet has taken the world by storm. Nearly 2 million people per month search for information about the keto diet, and combined with intermittent fasting, it is the most popular nutritional approach in the world. Unlike a traditional western diet, ketogenic diets rely on ketone bodies, rather than glucose. Since keto dieters eschew carbohydrates completely, they don’t have a steady supply of glucose, or good amounts of glycogen stored. Therefore, they must rely on an alternative fuel source. This alternative fuel source is ketones, which are made by your liver. Taking fat and converting it into energy, is called beta-oxidation.

Much like diabetics who track their blood sugar levels throughout the day, keto dieters like to track their ketone levels. Traditionally, this has been a difficult task, as the existing options were less than optimal. You could use ketone urine testing strips, or prick your finger multiple times a day, and use a ketone blood test. But as we’ve shown, the best way to test your ketone levels – especially multiple times a day – is using our patented, clinically-backed ketone breath monitor. 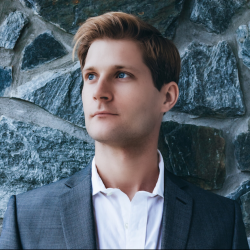 Casey is one of the most highly-regarded voices in the paleo and keto communities. He has written over 200 articles on health, science, nutrition, and fitness. As a National Academy of Sports Medicine certified personal trainer and fitness nutrition specialist, he has also helped thousands of people lose weight, look younger, and live their healthiest lives. He is also the author of the best-selling title, The Essential Instant Pot Keto Cookbook. 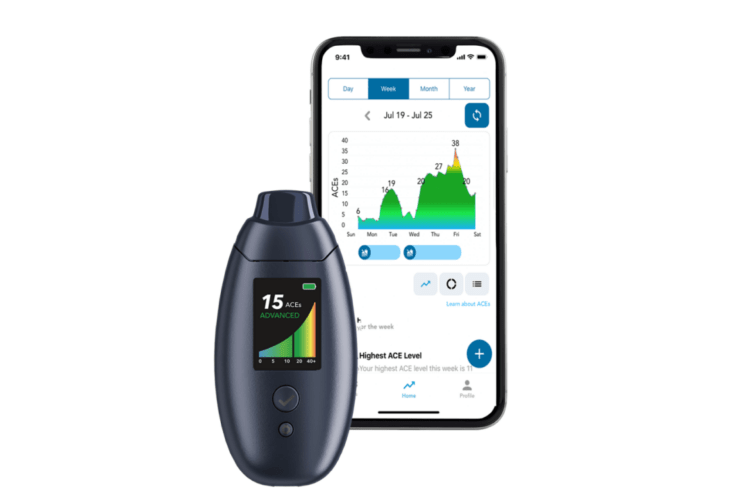 Researchers have been studying intermittent fasting in both animals and people for decades to...
Getting Started Nutritional Ketosis 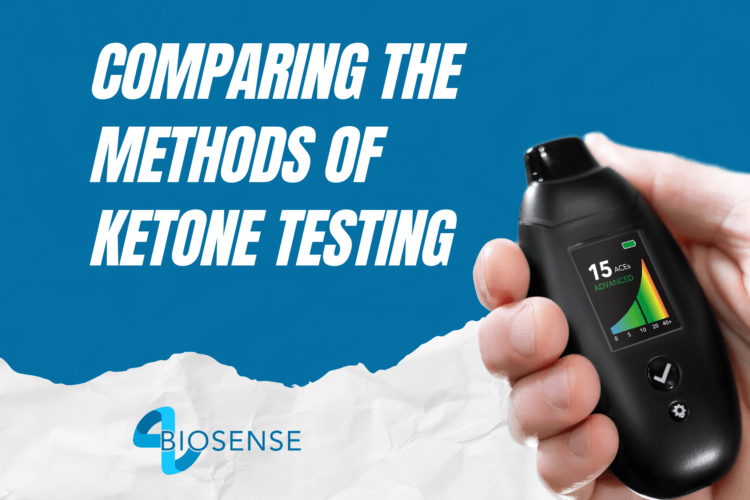 How to Test for Ketosis: Comparing the Methods

There are various ways to test for ketosis, but they are not interchangeable. Here...